Welcome back to Bonfire Chats! Last time we spoke to Leith Waldrum, a land management specialist about his position. Today, the tables have turned and Leith sat down to interview Luigi DeRose, a bass fishing expert. Take a look at their Bonfire Chat, or a summary of their convo below!

Tell us a bit about yourself: 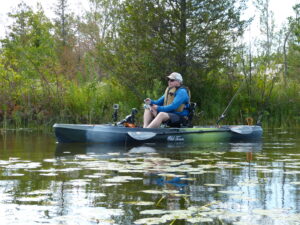 I took something that I always love – the outdoors (mostly fishing) and of course, I do outdoor things. I boat, I like to kayak and I do everything I can do outdoors when I’ve got the time! Then that turned into a fun activity when I would write about my experiences. I’ve actually been writing since the mid-90s and have been a writer for longer than I’ve had my full-time career. It’s been fun and it’s given me a good opportunity to meet new people and challenge myself because I’m always looking for a new article. I’ve been lucky to have a career with Ontario Outdoors, which is Canada’s leading outdoor magazine.

I was their bass editor and now my focus is on bass fishing but I’ve done it all! I love perch fishing in spring, crappie and steelheading. I’ve actually been really fortunate and have fished on four different continents. I fish for bass in South Africa, all the way to Japan and in the United States and Canada. So, it’s safe to say that I’ve been pretty lucky.

When did you begin writing blogs?

I started when I realized there wasn’t much information available in Southern Ontario. We focused on Southern Ontario or Canada but mostly Southern Ontario and the Northern States. I turned that blog into something that’s been really fun. We put up lots of videos, tournaments and also do some product reviews for a lot of cool things you wouldn’t see on mainstream media.

I have a little insight knowledge without their writers from Japan and I’ve been lucky enough to meet up with some cool people over the years. I knew them before they were fishing in the States. It’s just been a great opportunity to introduce the outdoors too so many people. It’s also such a great way of meeting people too!

Can you tell us a little about invasive species and grass carp in particular? 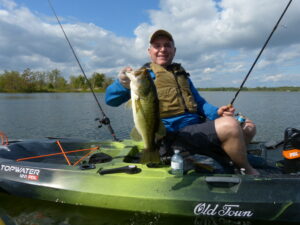 In the past at fish farms, grass carp used to be used to keep the algae down. Then they had huge floods and they escaped and went into the river systems. When they got into the Mississippi, they just keep moving further north until they reached the Illinois River. They go up and down the Mississippi and other rivers like the Ohio, Illinois and Red River, creating a lot of barge traffic.

There’s a discussion about the Tennessee River area when it comes to the electroshock that’s happening in Kentucky that then goes down to Tennessee. It’s shocking! There are just 10s or 1000s of these fish appearing and I hear that the fishing is brutal. When you check your electronics, you don’t know what you’re looking at and they’re so gigantic that not even a muskie will try to eat it.

They’re trying to prevent them from coming by using an electric field across the river and want to keep the water open. They don’t want to put nets or anything like that in place because if the nets break, it can cause issues. If it gets into the Great Lakes, that’s really scary. I know that the Ontario Federation of Anglers and Hunters has really worked hard at addressing these issues on the Internet and have a program available for children.

They’ve done a lot for the invasive species, especially the water soldier which is a type of grass that’s the Kawarthas primarily. When it’s in Lake Ontario and the origins are from the States, that means that they’ve gone through Michigan, St. Clair, Erie and now here, so that’s pretty disturbing.

What’s your biggest concern regarding these invasive species?

They’re plankton eaters, so they harm the food chain right at the beginning. It’s not like they’re an eagle where they just eat as a top predator. They affect the food chain, meaning they’ll affect everything. So, if you have shiners, amphibians, any of that stuff that needs grass, it’s going to go.

I remember watching a TV show as a kid and they were either white bass fishing in Lake Erie or walleye fishing and they were using goldfish. Everybody knows that you can’t just dump your bait but they just dumped the bait! So even as simple as dumping your bait is something to be aware of.

I know I’ve seen guys perch or crappie fishing and you know, minnows are very common but it seems cruel when you don’t know where those fish come from and that’s how they’ve ended up with the rusty crayfish too.

I know you often kayak. What kayaks do you use? 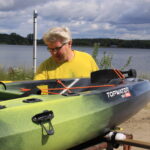 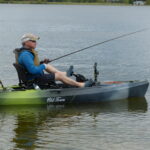 I’m dying to use my new kayak. I’ve some old town ones but I’m keen to keep using a pedal kayak I have. I have a top wire 12 PDF. It’s like a bike and it’s got a propeller that’s awesome! I’m excited to use it for bass fishing. I’ve got a couple of friends who enjoy kayaking but they go on Lake Ontario, Owen Sound for salmon, Erie for walleye and I always wonder why.

As a bass fishing expert, are you a part of any fishing communities?

I’ve helped out with children’s groups. I work with the Chinese Fishing Association Club in Southern Ontario and it’s a really strong club. They have hundreds of members and a lot of them are kids and even women too. It’s not just a bunch of guys, which is really neat.

They were responsible for putting the Ministry of Natural Resources fishing regulations in Chinese font so you can see it.

What do you think about the properties we have on LandPass?

I love LandPass! I just book it and I’m already in and I don’t have to worry about the neighbours, which is great because I know that I have every right to be there. It’s also nice knowing that I’ve got nobody complaining, no one trespassing, so it just takes all of the negatives out of the equation.

I also think that with COVID-19 and everything being closed lately, it’s been tough to get out there. I’ve seen a lot of ramps closed on social media and I don’t want to get someplace only to find out that it’s closed. One thing I think is really great with LandPass, especially for anglers is that if their favourite lake isn’t doing well, you’ve got this dry lake to use. I’m really keen to get my kayak out on one! I just think LandPass is such a great idea and I already have friends that are asking me when we’re going turkey hunting on some of the properties as well.

Where can people find more of your work?

You can find my work on Ontario Outdoors and iBassin!

Want to watch the conversation between Leith and Luigi? You can watch it here!